Jessica Mitford, a.k.a. Decca, was the profound irreverent author of "The American Way of Death" exposing the corruptness within the funeral industry, which won her critical acclaim and numerous accolades.

Besides her keen journalistic writings, Jessica Mitford pursued her other passion, singing. The author by day and singer by night became the barroom belter to renditions of Beatles tunes in collaboration with backup band, the Dectones. In honor of the prolific writer and singer who in 1995 went on to record a CD titled Decca and Dectones in which today has become a collector's item as well as the Jessica Mitford mug, bluelips.com is pleased to sell these unique treasures. Slating her infamous saying, "You may not be able to change the world, but at least you can embarass the guilty" with the visible misspelling of the word "embarrass" makes for a coveted collectible. 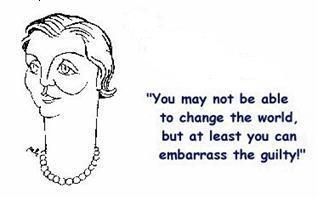